Isn’t every Apple Event special? On Episode 64 (make that 64 bit, we upgraded) of inThirty
Chaim, Harry, and Justin along with guest host Kelly Guimont of TUAW ooh, ahh, and yawn (Chaim) over the announcement of the new iMac and Mac Mini, MacBook Pro 13″ with Retina Display, iPad with Retina Display (don’t call it the iPad 4), and the worth the price of admission all by itself iPad Mini. We start by critiquing the legerdemain used by Phil Schiller when he removed the black cloth from the slim from one perspective, bulbous from another iMac and quickly move on to discuss whether the new Mac Mini is enough to replace the Mac Pro or even the defunct Xserve. We boldly go where no podcast has gone before in our discussion of Apple’s Fusion Drive SDD plus HDD melding tech. And, yes, everyone wants the new 13″ MacBook Pro with Retina Display – how could the little sibling of the beautiful 15 incher disappoint? Do the non Retina MacBooks deserve to keep their Pro suffix? We discuss. Amongst ourselves. Apple speeds up its upgrade cycle some with the iPad 4, but how long did you expect the Lightning port to be kept away from the iPad? We finish up with a who/what/where/when/why on the iPad Mini and manage to wake Chaim up from his slumber (he uses Apple announcement videos as a sleep aid) in time to compare the new device to his beloved Nexus 7.

Also, Harry Marks strummed us some nice intro and outro licks. Told you we upgraded. 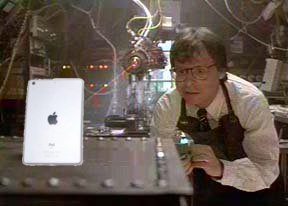 While it’s still a possibility that an iPad with a 7 inch screen may never make it outside of Jonny Ive’s secret industrial design compound, it doesn’t stop us from talking about every inch of the yet to be announced device on episode 62 of inThirty. Whether it’ll be called the Mini, Nano, Small, Little, Micro, or Petite, Chaim, Harry, and Justin conjecture, speculate, and postulate about how the device’ll fit into Apple’s current range of mobile products and analyze the impact of screen size on how users consume their digital diets. Want to find out the best screen size for playing Solitaire or reading the Wall Street Journal or mixing the musical score for a feature film? You better search Google for the answer because we come to no conclusions on this episode of inThirty. Oh, and less is more, sometimes.

It’s finally here, the new…inThirty, oh, and the new iPad was announced, too.
Just in time for our 31st episode, Tim Cook took to the stage and revealed what everyone knew was coming but nobody could wait for: the new iPad. We cover the new naming convention, dissect the new hardware components, weigh in on whether this step up is evolutionary or revolutionary, and determine if it’s feasible for James Cameron to shoot Avatar 2 with the device’s updated camera.
We’re joined by epic MacRumors forum poster, Apple enthusiast, and computer science student at Tim Cook’s alma-mater Auburn University, Drew Pitchford. Listen in to find out about Drew’s special connection to Mr. Cook and how Drew’s predictions for the new device panned out. He also gives us his impressions of iPhoto, its new Beam feature, and the brand new 4G logo on his iPhone. And, don’t call the iPad 2 old, he used it to Skype in for the show.