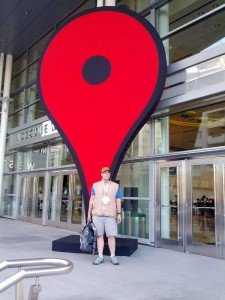 Chaim is our liaison to Google I/O 2012 for episode 47 of inThirty and shows those left coasters the best way to make use of thirty minutes.  Listen (or watch) the madness that is registration and see if Chaim can get a properly sized t-shirt, stalk a Googler, and count the number of jelly beans throughout Moscone all while giving us thirty minutes of podcast gold.

So someone at Microsoft HQ finally read Walter Isaacson’s biography on Steve Jobs and the Surface was born! On episode 46 of inThirty we take you through the keynote that marks Microsoft’s entrance into the pantheon of PC manufacturers and the device that’ll do it. We compare, only as appropriate, Microsoft’s methodology to Apple’s: Chaim comes out with high hopes for the platform, Justin is ambivalent but thinks the touch keyboard cover thing is cool, and the Surface definitely gets under Harry’s skin.

Yes, aside from the occasional poem about Chaim, we primarily talk things out on inThirty. But, leading up to WWDC, inThirty guest, levelheaded but voracious consumer of Apple rumors, friend of Tim Cook’s (sort of), and all-around nice guy Drew Pitchford was good enough to layout his prediction for iOS 6 using the written word. Knowing Drew, he probably typed the list in Pages on his new iPad:

Checkout our show on product predictions for WWDC 2012 here.

Chaim, Harry, and Justin turn to reading tea leaves for episode 44 of inThirty: WWDC 2012 is fast approaching and we lay down our predictions for product announcements at the conference. Fresh on the heels of Tim Cook’s All Things D appearance we try to figure out what’s in the pipeline and whether there’s going to be “one more thing.” We’ll followup with a scorecard episode, but until then, listeners place your bets.

And for those of you who were about to take out your abacus, we’ve temporarily skipped episode 43. It’s going to be cobbled together in Garage Band soon enough but you can get your fill on YouTube if you can’t wait for it to show up in your RSS feed.